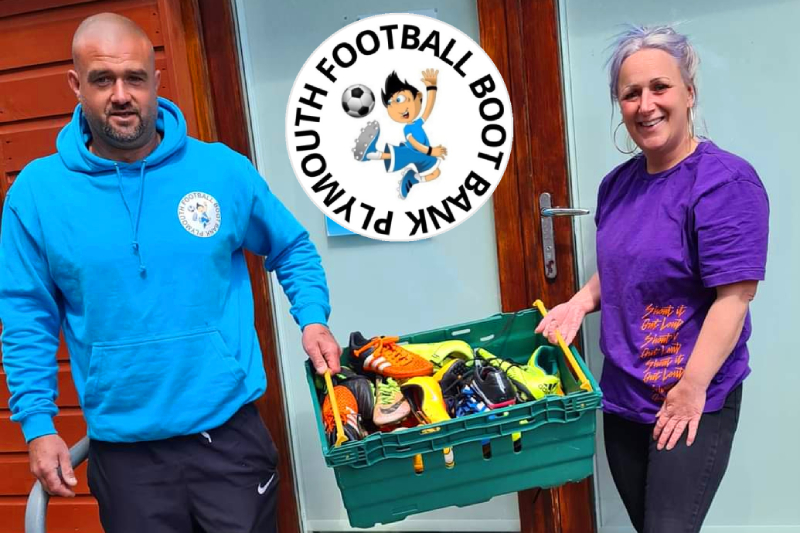 POP gets to hear about many wonderful initiatives that begin because someone somewhere has a good idea: that idea then turns into action and, before-you-know-it, a fantastic grassroots community project has been born.

Take local painter & decorator, Luke Riggs, for example: two years ago he was a Dad helping out with a bit of coaching at his son’s football team (Marjons U14s) the next minute, he’s established a Football-BootBank and providing thousands of boots to hundreds of families across the city free-of-charge. The need for the project has, he says, taken him, completely by surprise:

“It started off with me polishing up my son’s football boots and offering them up on Facebook. And then it just got bigger, now we’ve got about two hundred pairs of boots going out every month; we’re sending to Cornwall and looking at starting one in Exeter.”

Luke reckons that since it began, he has sent out more than 3,000 pairs of boots. The majority – about 90% – stay in the city, the rest travel to Gambia where “they literally play in bare feet”. As a parent, Luke understands that some families will find it hard to pay between £30 and £100 every time their children need a new pair of boots:

“There’s so much pressure on parents with financial problems trying to keep up with expensive uniform and sportswear and this is just a great way of being able to support them.”

With a £1000 grant via POP from the Street-to-Scale fund and the willingness of several local companies to support the project and sponsor a bin, the Football Boot Bank has been able to pay for forty eight ‘collecting’ bins and set them up at schools, sports clubs and businesses across the city. A charity match last year helped to raise another £1800 which has meant that the boot bank can now rent a garage which has helped enormously. With several hundred pairs of boots coming in every month Luke was running out of storage room:

“I’ve got a 4’ by 6’ shed and that soon filled up and then the boots were taking over the spare room as well!”

And there have been a lot of redundant boots: with lockdown, all club sports stopped, and thousands of pairs of football boots sat idle, while, at the same time, children continued to grow. The problem post-lockdown: children had got too big for their boots.

“We passed on a brand-new pair of boots”, says Imogen Potter, “with no games, the boots just hadn’t been worn.” Imogen also gave Luke some advice. As the capacity building manager for POP ideas, Luke had approached Imogen for help with the development of the boot bank. Now, with a committee and a constitution, the Football Boot Bank has evolved into a formal organisation. As Luke admits there’s a bit difference between being a football ‘Dad’ to running a city-wide project:

“It’s been a bit mad at times and it’s taken up a lot of time and effort. But I couldn’t stop now, not knowing that there’s such a demand for it and the difference it makes. And I’ve got to know some of the families and some of them are so grateful they send me photos of the kids in their boots … no, I couldn’t stop now.”

If you’d like to donate a pair of boots; get involved; support the Football Boot Bank in your community or if your child is in need of a pair of boots contact Luke at Plymouthfootballbootbank@yahoo.com or visit their Facebook page: https://www.facebook.com/Plymouth-Football-Boot-Bank-677351636037494/ 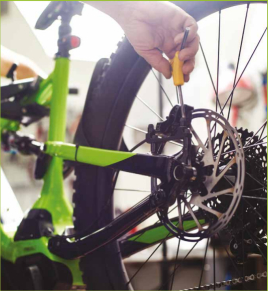 An ongoing relationship between the social enterprise, Bikespace and Devon and Cornwall Refugee Support has provided people the freedom to get around; a means of exercise and a little bit of joy.

At the beginning of 2020 DCRS acquired some funding to rent out part of the Bikespace workshop for a new project one day a week to repair old bikes which would then be given to members of Plymouth’s asylum seekers community. The project ran for several months and during that time more than twenty bikes were repaired by Ronnei, a trained mechanic and Kurdish refugee, who helped to devise the programme with Suvi Rehell, project manager with DCRS at the time. Almost immediately, Suvi saw how the project was making a difference;

“I was going for a walk and I saw two guys cycling by the seaside and I knew that they had got their bikes from us. So, not only are they able to get to their appointments and college and where they want to be for free, but they could cycle to the seaside and get some fresh air and that made me very happy.”

And it worked out well for Ronnei too. Once the project with DCRS came to an end he was taken on at Bikespace. Now, after completing a course at the City College, he is once again working as a qualified mechanic in one of the city garages. As Suvi from DCRS confirms: Integration of refugees through sport is about more than sport.

Wheels keep turning: if you have a bike that you no longer require you might like to donate it to Bikespace.
www.bikespace.org.uk 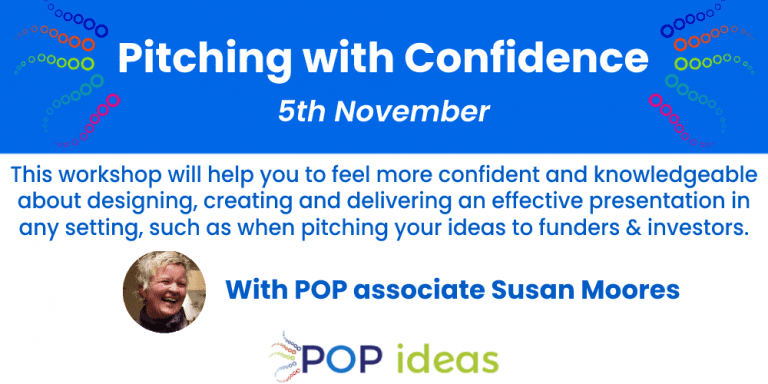