The Aid Redistribution Centre (ARC) radically improved the way donated food is being collected from supermarkets; stored and redistributed across Plymouth. Since then it has effectively and efficiently provided more than seventy tons of food to local charities and causes.

Acting as a central point from which food could come and go, it has changed the way local food banks; community projects and voluntary organisations work for the better.

The ARC has evolved rapidly and today it’s not just about food: more than sixty diverse organisations are being supported, for example, the (newly established) Hygiene Bank with toiletries; the Uniform Store with clothes for school children and Bramble’s Pet Food Bank with… pet food!

Meanwhile, as word has spread about its role, donations are arriving every day from all manner of businesses, such as, sun cream & sleeping bags from Service Design Solutions Engineering Consultants; kitchenware from national retailers and eggs from local farms. Ayshea Cross, the Plymouth Food Aid Coordinator, says all donations are passed on;

“”The challenge is to be creative, we recently had, for example, thousands of black flower buckets donated by the Coop. The Arc gave several hundred to gardening projects supporting people with loneliness and isolation and sent loads more to refugees living in Greece via a Plymouth-based humanitarian charity OHOB.”

An unexpected outcome of the project has been the willingness of people to work together. For example, drivers from the Co-op, en route to the ARC, are now stopping off at Marsh Mills and delivering Sainsbury’s donated goods as well as their own.

Furthermore, as project volunteers coming to the ARC are finding out about the other organisations so donations are being passed directly between the groups, speeding up the process.

“Blankets donated by Suited to Help, came into the ARC,” says Ayshea “and then our volunteers immediately passed them on to the volunteers from the soup run who were in the ARC to collect food for that night’s soup run. Several hours later, those same blankets were spotted out on the streets with a person who was homeless.”

The evolving collaboration has also led to changes across the voluntary and community sector with the ARC now acting as a one-stop-donation-shop for organisations; businesses and charities to both give and receive. This, in turn, has had a significant impact on the sector saving time and money and enabling volunteers to do what they do best – supporting local people.

“Being able to offer a whole range of items to a whole range of projects makes for greater efficiency. A lot of those smaller grassroots groups have been started by individuals who saw there was a need for helping people and just got on with it; connecting in with the ARC enables all of us to work better and support more people.”

The ARC has rapidly established itself as a fundamental part of the city’s solution to supporting people through COVID and triumphed as a centre of excellence for efficiency and connectivity.The ARC has received funding from the National Lottery and the Government-funded COVID Grant. The project is supported by Food Plymouth CIC; The Plymouth Food Aid Network and Plymouth City Council. To find out how you can support or to donate items, contact ayshea@foodplymouth.org.

A new VCSE Assembly for Devon, Plymouth and Torbay 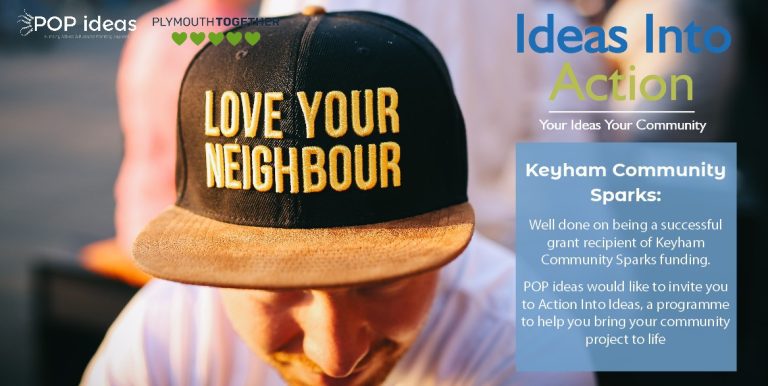 Ideas into Action (for Keyham)